People are becoming increasingly aware of the importance of gut health and how such common problems as leaky gut and food intolerances can cause symptoms throughout the body. These are just a few of the symptoms that originate in the gut:

To understand how leaky gut occurs and what you can do to heal your gut naturally, it helps to get to know your gut wall.

What Makes Up the Gut Lining?

These layers are key to keeping the “outside” environment, meaning gut contents such as bacteria and food particles, separate from the “inside” environment of the bloodstream to avoid immune reactions or overreactions. Overstimulated immune responses play a role in the development of food intolerances, allergies, and autoimmune conditions. 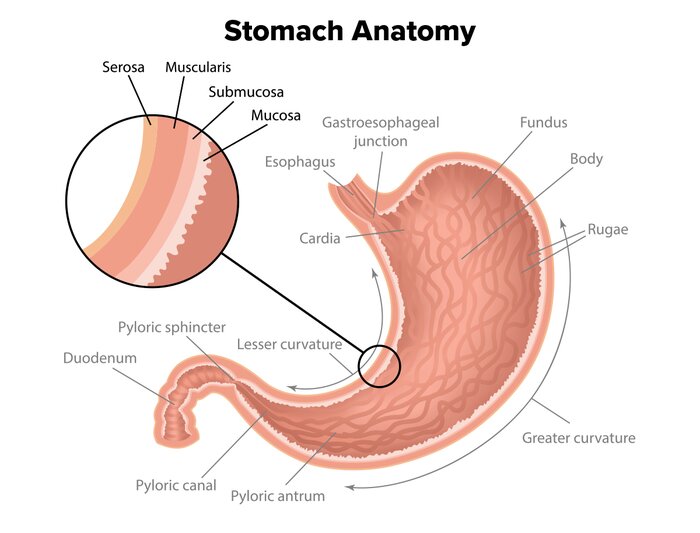 Each of these layers has a slightly different structure and function.

The mucosa is the innermost layer. It’s made up of epithelial cells (cells that line surfaces of the body), glandular tissue, and loose connective tissue such as adipose, or fat, tissue. The latter is responsible for absorbing nutrients and secreting sticky mucus from the goblet cells.

The mucosa itself is made up of three layers:

The epithelium must be intact to maintain a barrier between bacteria and other microorganisms as well as their metabolic by-products in the gut lumen and the gut wall. Many bacterial species produce inflammatory metabolic by-products such as lipopolysaccharides, which can trigger immune responses if allowed to bypass the first-line-of-defense epithelial layer. It is not unusual for normal gut bacteria to interact with the epithelial layer and produce a physiological inflammation, which is easily controlled.

The goblet cells within the epithelial layer secrete a sticky mucus to form a layer over the epithelial cells that helps prevent bacteria from moving to the tissues underneath and breaking down these barriers. 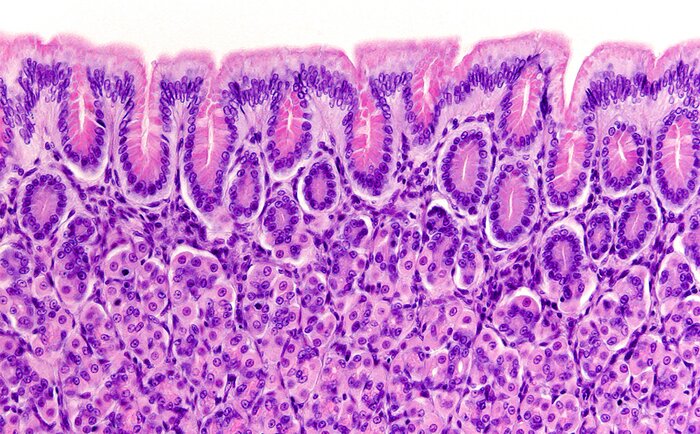 The submucosa is made up of loose connective tissue containing blood vessels, lymphatics, nerves, and protective mucous-secreting glands. Nutrients absorbed from the mucosa pass to the blood vessels in the submucosa, where they can enter the bloodstream and be transported to tissues and cells throughout the body.

Because this layer has a rich blood supply, it is also where bleeding occurs when ulcers penetrate the muscularis mucosa, described below.

The muscularis propria is made up of smooth muscle involved in peristalsis, which is the rhythmic contractions needed to move food through the gut. It consists of an inner circular layer and an outer longitudinal layer of muscle. The circular layer stops food from going backward so it always goes forward, moving in one direction. The longitudinal layer shortens the gastrointestinal tract.

Myenteric nerves are nestled in between the two layers of muscle and control peristalsis. Damage to these nerves can cause dysmotility and symptoms of constipation.

The following factors are associated with damage to the myenteric nerves:[1] 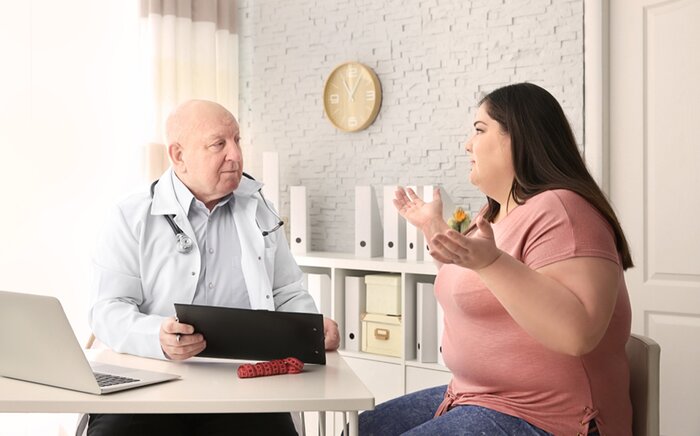 This is the outermost layer and consists of loose connective tissue containing blood vessels, lymphatics, and nerves. It has a thin layer of cells that secrete a serous fluid, as opposed to the thicker mucus, which acts as a lubricant to reduce friction from muscle movement.

When any of these layers or structures is damaged, you end up with leaky gut syndrome. The good news is that it’s possible to heal your gut with herbs and good nutrition.

Opportunistic Bacteria Breaking Down Your Defenses!

Some pathogenic organisms of the microbiota such as Citrobacter and Ruminococcus have the ability to break down the mucosa and increase the risk of infection and bacterial translocation. Other species such as Bifidobacteria do the opposite and help maintain this very important mucus layer.[2]

When the mucus and epithelial layers of the mucosa become compromised in the gut wall, it’s typically called a leaky gut, but a disrupted mucus layer is also characteristic of gut disorders such as ulcerative colitis.

Factors that don’t necessarily cause ulcers but can worsen them include: 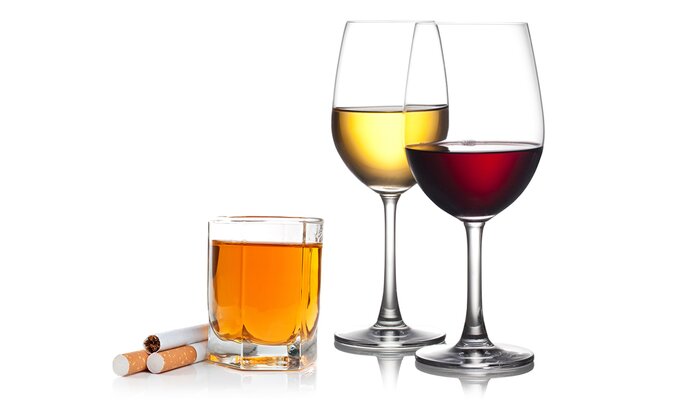 The Top 4 Ways to Heal Your Gut Naturally

Once the mucus layer has been compromised, opportunistic bacteria are able to attach to the exposed epithelial layer of the mucosa and damage it. These bacteria combined with their highly inflammatory metabolites such as lipopolysaccharides can then go deeper into the mucosa and create further damage. Minimizing inflammation goes a long way toward slowing down or protecting against tissue damage and allowing healing to take place.

A good place to start is diet. In order to keep the mucosa healthy, you want to minimize foods that may feed pathogenic organisms, such as highly refined sugars, processed foods, and other high-glycemic-index foods. Instead, eat a wide variety of seasonal fruits, vegetables, nuts, seeds, unprocessed plant foods, eggs, grass-fed meats, and deep-sea fish for antioxidants, omega-3s, omega-6s, and other anti-inflammatory compounds. Go organic where you can.

Normal or commensal species of bacteria can become pathogenic if they are allowed to overgrow and dominate other species of gut bacteria.[5] Polyphenols are organic food compounds that have modbiotic-like properties and act as a poison to many bacterial and fungal organisms by interacting with their cell walls as well as starving them of nutrients they need for growth and replication.[6] They are found in the fiber of vegetables, fruits, and other plants and are especially numerous in the skins and peels of seasonal fruits and vegetables.

Pathogenic organisms that can contribute to other immune and gut disorders can break down the mucus and epithelial layer in the gut lining. Herbs such as Artemisia annua (sometimes called qing hao, or sweet wormwood), reishi mushrooms, and myrrh are traditionally used in herbal medicine for their anti-microbial properties against some bacteria, fungi, and parasites to balance gut organisms.

3. Feed the Good Guys in Your Gut

Plant fibers from fruits and vegetables are an important source of nutrition for beneficial bacteria such as the Bifidobacteria needed to produce mucus and protect the mucosa from pathogenic organisms.[2] Gut bacteria work to break down undigested food fiber and produce short-chain fatty acids such as acetate, propionate, and butyrate, which serve as food for the epithelial cells to help them repair and transport nutrients to keep the gut wall healthy. 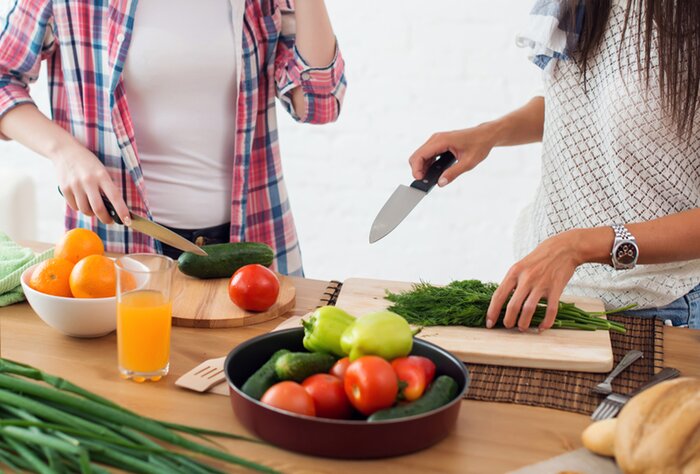 4. Give Your Gut the Building Blocks It Needs

If you suffer from leaky gut syndrome, make sure that you get enough protein to repair the gut lining. Collagen is a rich source of protein and the amino acids needed to build healthy connective tissue. All your muscles, bones, ligaments, tendons, skin, hair, and nails are made up of collagen, and that of course includes the muscular layers within the gut wall.