Bodybuilders of color have been integral to the development of their sports, and of lifting culture more generally, for decades. There’s no better time than Black History Month to look back and celebrate some of the most iconic African American physique athletes, from the Golden Age of bodybuilding to the present day.

A note on the choices: Our selections are presented in approximate historical order—not in order of importance or achievement. While there are countless impressive and important bodybuilders and physique athletes of color worldwide, we are limiting this list to African Americans. That means some otherwise worthy names—Serge Nubret and Sergio Oliva, for example—aren’t on the list.

You can argue over the exclusions—please do!—but there’s no denying that these inspirational athletes are among the best who ever lived and lifted.

Leroy Colbert was born in 1933 and competed in several top amateur contests in the early 1950s. Among his titles were Mr. New York City in 1952 and the 1953 Mr. Eastern America. But he’s remembered today more for what he accomplished away from the stage. For one, he was among the first men of color to grace the cover of bodybuilding and strength magazines—and this was before the Civil Rights movement of the 1960s. He is also credited as being the first man ever to achieve 21-inch muscular arms. 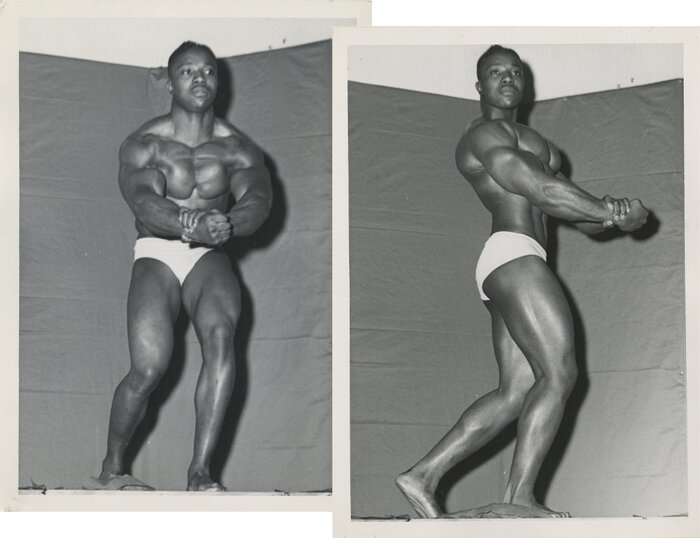 Colbert retired after a catastrophic motorcycle accident almost resulted in him losing a foot. He went on to run supplement stores in later years. Colbert passed away in 2015 at the age of 82.

With his peerless stomach vacuum and perfectly geometrical afro, Robinson is an indispensable part of the story of bodybuilding’s Golden Age. He may be familiar if you’ve seen the movie “Pumping Iron,” but “The Black Prince” made contributions to bodybuilding far beyond that. He was also nicknamed “Mr. Lifestyle” because of his commitment to bodybuilding, and he’s continued to live up to the title for decades. 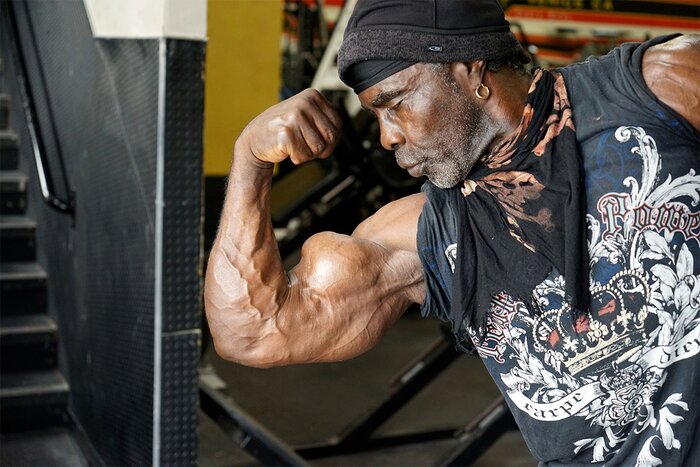 In 1975, he won the Mr. America, Mr. World, and Mr. Universe pro titles in the same season. In 1979, he was also the first winner of the Night of Champions show, now known as the New York Pro. Amazingly, 15 years later he was still in peak condition and beat out heavily favored Lou Ferrigno to win the first Masters Olympia in 1994 (you can still see video of the show on YouTube).

And now, 50 years into the game, Robinson is still undeniably jacked. Before the gym closures of 2020, he could still be seen in Gold’s Gym Venice every day, training hard at nearly 75 years old.

Throughout its history, the Mr. Olympia title has been held by men of different backgrounds from all over the world. For just a few examples, Sergio Oliva was from Cuba, Arnold Schwarzenegger came to America from Austria, and Samir Bannout hailed from Lebanon. 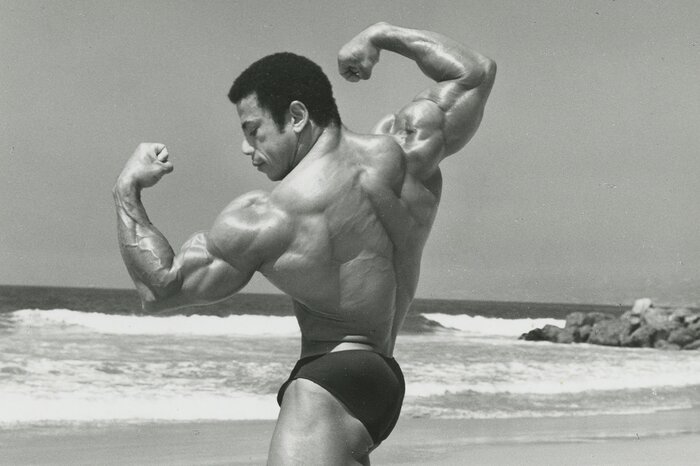 But it was the 1982 titleholder, Chris Dickerson, who served as the first African American champion. Amazingly, he achieved this milestone just short of his 43rd birthday, when he was 16 years into his impressive competitive career. He broke another major barrier in the sport, as well, as the first openly gay man to win the title.

Lee Haney was the first completely dominant Olympia competitor of the post-Arnold era. He defeated incumbent Samir Bannout to win the first of his eight consecutive Sandow trophies in 1984. The South Carolina native would become the biggest name in the sport for the rest of that decade, releasing VHS training tapes and even earning coverage in mainstream outlets such as ESPN. 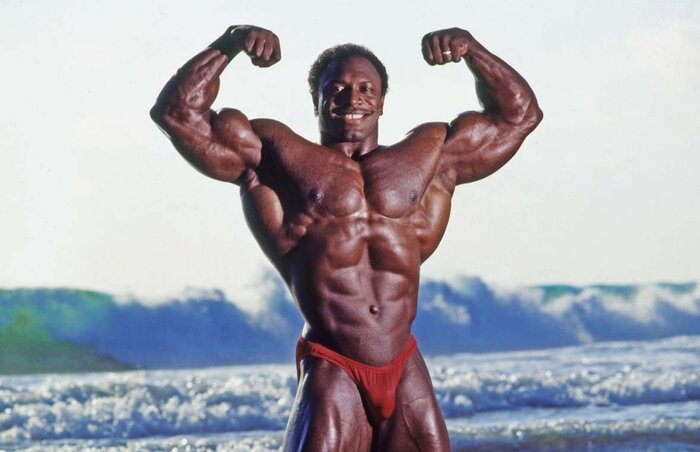 He also could be seen training with various professional wrestlers from the World Wrestling Federation (now WWE), and fortunately for the rest of us, the results have been preserved online. Haney retired after his eighth win in 1991, which broke Schwarzenegger’s record of seven titles. He currently promotes contests and is still active in bodybuilding while living in Atlanta, Georgia.

What Haney was to men’s bodybuilding, Lenda Murray was the equivalent on the women’s side of the sport. The eight-time Ms. Olympia winner set a new standard of muscular development and had a tight hold on that title from 1990 through 1995. Her first victory was actually the first time she competed in the contest. No other competitor has won the Olympia in his or her debut appearance since. 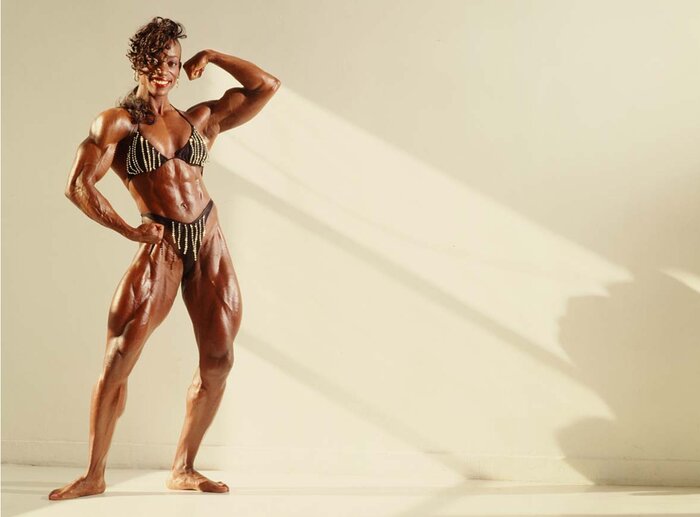 She won two more titles in 2002 and 2003 before retiring in 2004. She has stayed involved in bodybuilding and fitness both as a promoter and in a media role.

Want to know what longevity looks like? Morris undertook his first bodybuilding show in 1959, and his final show in 1996, when he won the 60-plus division at the Masters Olympia. In between, he held numerous titles: Mr. America, Mr. USA, and Mr. Universe among them. For 14 years, from 1974-88, the so-called “Nice Guy of Bodybuilding” worked as Elton John’s personal bodyguard, during which time he transitioned into a vegetarian lifestyle—the nutritional approach that fueled his Masters Olympia win.

Later still, Morris became a strict vegan, and at age 78, he even posed nude in a PETA advertisement in support of veganism, mimicking Rodin’s famous sculpture The Thinker. That year, he was also the subject of a 14-minute documentary about his lifestyle, training, and philosophy. Morris died at age 80 in 2016.

Shawn Ray was a teen sensation who evolved into one of the top contenders for the Olympia in the 1990s, which is considered by many fans to be the most competitive decade in the sport’s history. The 1991 Arnold Classic Champion placed second at the Olympia twice, but finished in the top 5 an amazing 12 times, a feat never accomplished before or since. 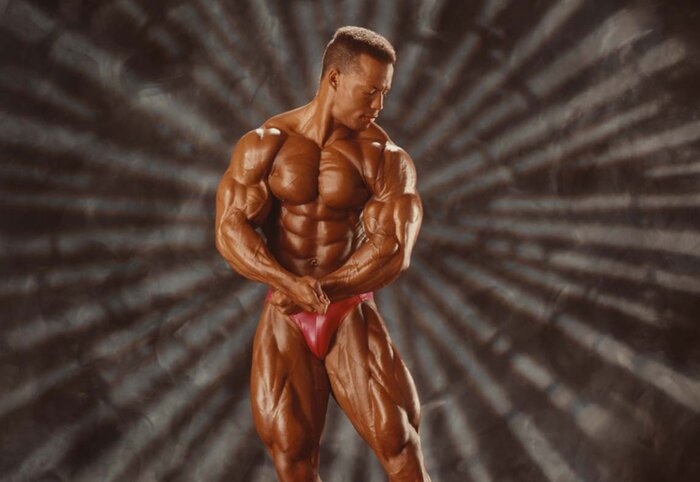 His runner-up finish to Dorian Yates in 1996 is considered one of the most controversial results on that stage. The only men he was never able to defeat onstage were Haney and Yates.

Wheeler was another of those top contenders in the 1990s, and is still cited regularly by commentators as perhaps the all-time master of posing. He won four Arnold Classic titles over the course of his career, and finished in second at the Olympia on three different occasions, earning him the nickname, “The Uncrowned Mr. Olympia.” 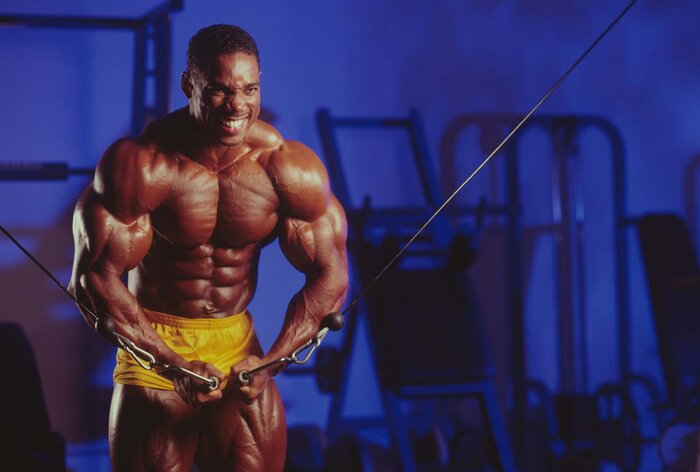 In recent years, Wheeler has continued to be one of the most inspirational figures in the sport, first because of his comeback in the Classic Physique division in 2017 at more than 50 years old, and later because of his ongoing recovery from losing his foot due to nerve damage in 2020.

Ronnie Coleman is an unquestionable all-time great, but he was no overnight sensation. He debuted as a pro in 1991 and slowly worked his way up the ranks. He would shock the world by defeating Flex Wheeler for the Mr. Olympia in 1998 at Madison Square Garden. The then full-time police officer from Texas actually kept his day job while being the number one man in bodybuilding for the next few years. His feats of strength, such as bench pressing 500 pounds for 6 reps and squatting 800 pounds for a double, are still talked about to this day, and his catch phrases are an essential part of any serious lifter’s vocabulary. 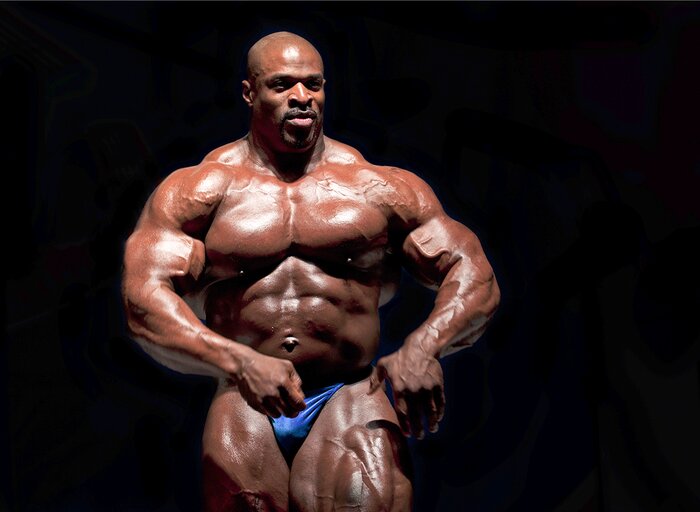 Image by B. Stefanov via Shutterstock

In 2004, Coleman competed at the Olympia weighing an astounding 296 pounds onstage. It’s considered the most impressive display of size in the history of the Olympia. He held the title until 2006, when he was finally defeated by Jay Cutler. Back in 2011, Coleman gave Bodybuilding.com an exclusive look into how he lived and trained.

When “The Blade” took the stage at the 2020 Mr. Olympia contest at the age of 51, it was the 21st and final time that he stood on the biggest stage in bodybuilding. He’s the only man to have ever competed at the Olympia in four different decades. 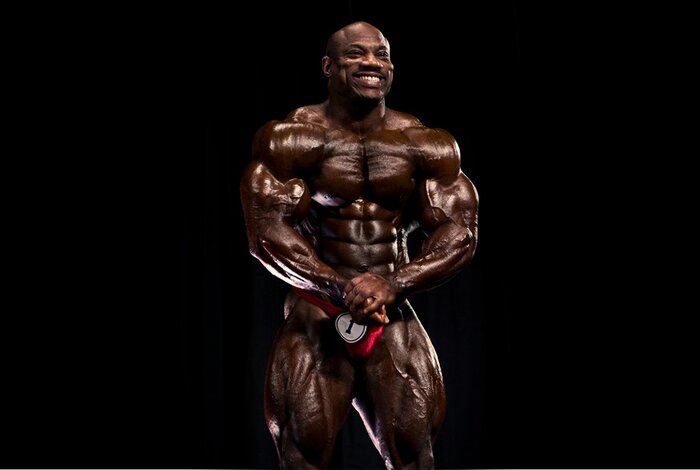 His first appearance was in 1999 where he secured ninth place. He won the title from Cutler in 2008, one of 29 professional victories he has secured, the most of any bodybuilder ever.

No competitor in bodybuilding, male or female, has held as many Olympia wins as Iris Kyle. Her dominance of the sport of women’s bodybuilding is something that only has parallels in other sports, like Tiger Woods in golf or Serena Williams in tennis. 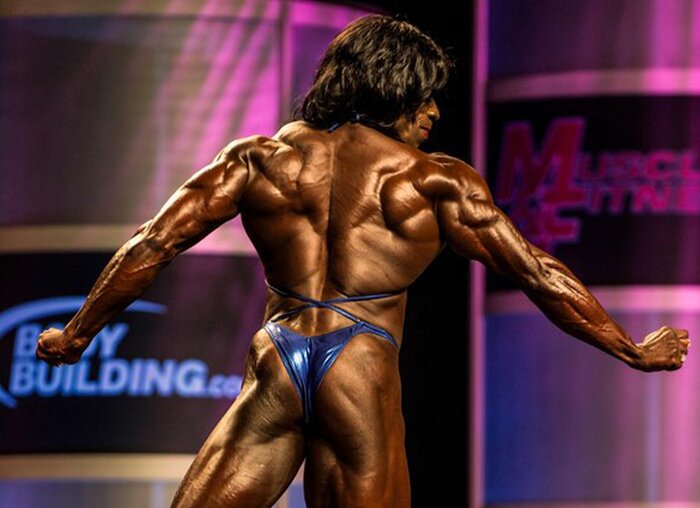 She is a ten-time Ms. Olympia winner, and retired with the title in her possession after her 2014 win. Her seventeen overall titles as a professional makes her the most successful female pro bodybuilder ever. Amazingly at the age of 47, she still hasn’t ruled out returning to the Olympia stage.

Heath was the most dominant competitor of the 2010s and made more strides in mainstream markets than many of the previous titleholders before him. He was the first Olympia champion of the social media era, and by appearing offstage on ESPN, WWE, Bloomberg News, and in the film “Generation Iron,” he helped bring more awareness to bodybuilding and fitness. 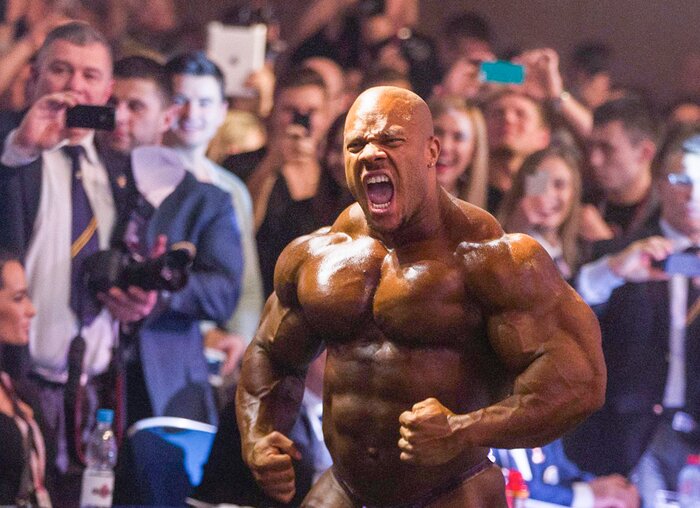 He finished third in the 2020 Olympia and sits tied with Schwarzenegger for the second-most wins of all time, behind Haney and Coleman.

“Mr. Getting it Done” hasn’t competed since 2016, but remains one of the most revered and inspirational bodybuilders of all time. Having had a troubled childhood, Greene embraced bodybuilding as an art form and became a top professional along the way. The three-time Arnold Classic Champion was considered Heath’s greatest rival during his reign as Mr. Olympia, but more than what happened on the stage, he has earned his devoted following with his philosophical personality and positive demeanor.

Candice Lewis-Carter has been a consistent presence on the figure stage for years and is used to her name being considered a favorite in any contest she enters. Among her 13 pro titles are the Figure International title wins in 2017 and 2018. 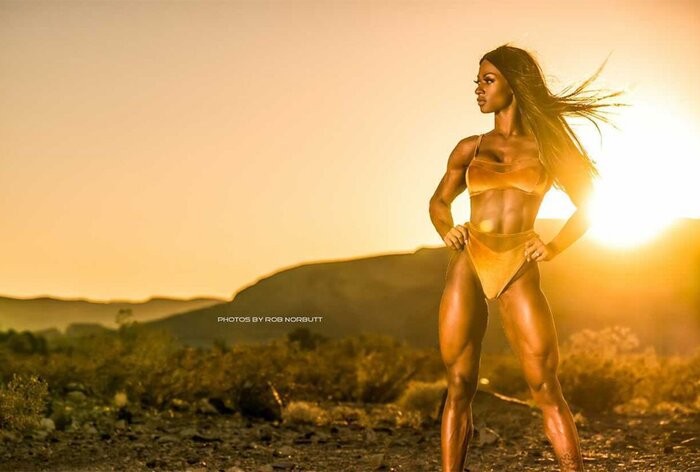 She placed second at the Olympia in 2018 and retired from competition that same year to start her family. She also focuses on helping mentor and train other women to become successful through her business Next-Level Lifting.

Gillon is one of the top active competitors on the women’s side of the stage, and is right in the midst of her own streak of dominance. She has won the Figure Olympia four times, including 2020, which tied her with Nicole Wilkins for the most wins in that division. Gillon is also a former Ms. International winner at the Arnold Sports Weekend. 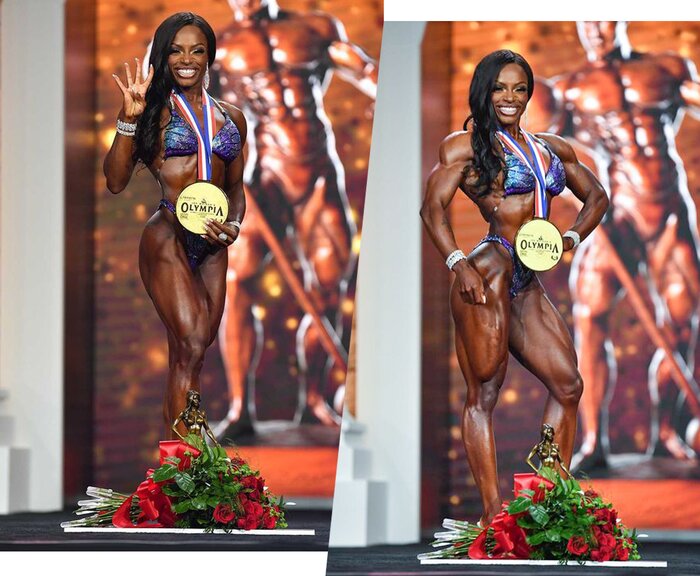 A former track star in college, she also showed she could do more than pose when she appeared on the reality TV show “Survivor.” Away from fitness, she has established the Cydney Gillon Scholarship, which helps students in high school successfully transition to college.