Strongman Robert Oberst is Ready to Shock the World

The first time Robert Oberst rambled into a strongman-focused gym, he knew instantly what he was born to do. At 6 feet, 8 inches tall and well over 350 muscular pounds, he may have been the last to realize what everyone around him already knew.

“A buddy of mine was an amateur strongman who was just obsessed with the sport,” Oberst recalls of that fateful day in 2012. “He kept begging me to come try it. So finally, I did, and the first time I ever touched the log, I broke the amateur world record for the log press.”

A promising start, but Oberst soon experienced his first thrashing at a real strongman competition. “I got my ass handed to me, but I had so much fun,” he chuckles. “I was hooked.”

What he wasn’t so keen on was losing. “The competitor in me is just not willing to suck at something,” he says. “As soon as I left that first contest, I started training hard and turned pro less than six months later.”

Nearly a decade later, he has become a regular presence at elite strongman competitions including the World’s Strongest Man and the Arnold Strongman Classic. At the 2021 World’s Strongest Man, he’s a darkhorse contender who could make a big surprise in the finals, which feature two of his best events, the log lift and the keg throw. As he put it in an Instagram post leading up to the event, “It’s time to show the world how hard I’ve been working.” 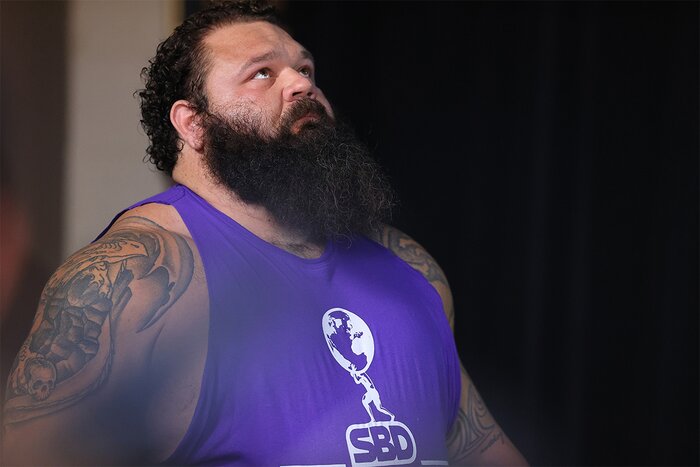 The eighth of 10 children, Oberst was short and chubby as a child. Between 10th and 11th grade, though, he grew seven inches while working at a summer camp.

“I remember sitting up at night in my tent just rubbing my legs because they hurt so bad from the growing pains,” he recalls. “When I came home at the end of the summer, my mom just started crying, ‘Oh God, what happened to my baby?'”

But Oberst didn’t stop growing. He eventually peaking at around 440 after becoming a full-time strongman in 2015.

“I came down to 360, and now I feel so much better,” he says. “I’ve done two shows since getting to that new weight, and both were the best performances of my life.”

Oberst’s goal now is to solidify himself at that 360 level, and make sure he can stay lean while adding muscle. 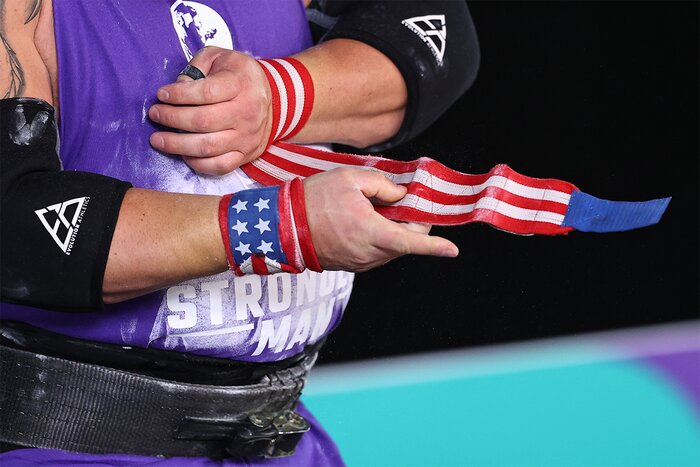 “I don’t want any excess weight,” Oberst says. “People involved in strongman try to tell you that the heavier you are, the more competitive you’ll be. I bought into that for a little while, but when I got so heavy that I couldn’t take four steps without breathing hard, I knew it was the wrong approach. It’s not about being as heavy as possible, it’s about being as strong as possible. There’s a big difference.

To spearhead his transformation, Oberst radically changed his strongman diet, cutting back from a height of 20,000 calories per day—seriously—to “just” 5,000-6,000.

“I count carbs exactly,” he says. “I work with a nutritionist who has given me a very rigorous six-meals-per-day meal plan. Three of the meals are whey protein shakes with a banana. My big meal of the day is 10 ounces of chicken with a cup of rice in the afternoon. I can also have 12 ounces of lean meat with some carbs for dinner. It’s not flashy, but it works.”

His diet, honestly, looks a lot like what a physique athlete would follow. But Oberst says he doesn’t mind.

“I work out with extremely heavy weights and higher endurance, but at the same time I eat like a bodybuilder,” he says. “When I first cut down my calories, my body was screaming for pizza and all that high-calorie stuff. But once my system adjusted, the clean diet gave me more power and energy than I’ve ever felt.”

To support his brutal training, Oberst also takes a number of supplements in addition to his regular whey protein, including L-glutamine, BCAAs, a liver-cleansing supplement, and a pre-workout. 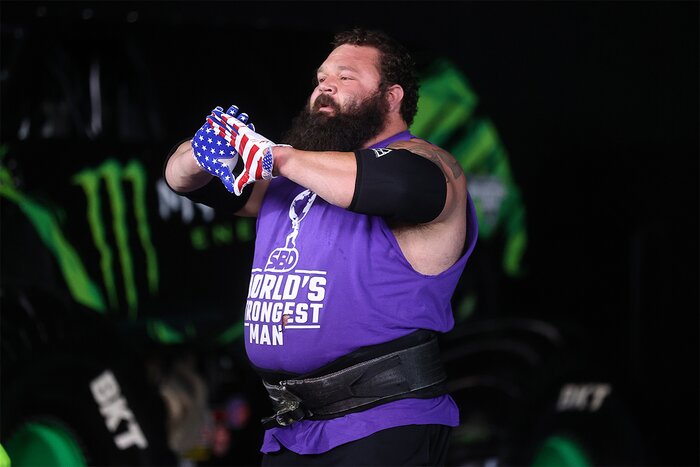 Oberst’s training week spans three somewhat predictable days: an upper-body day, a deadlift-focused day, and a squat-focused day. In these workouts, he’s not afraid to use bodybuilding rep ranges of 12 or higher, or chase an arm pump on moves like preacher curls or triceps push-downs.

Why? Well, strongman training doesn’t just hit big muscles, it hits all muscles—and all the slow-twitch and fast-twitch fibers making up all those muscles. Oberst says a well-rounded approach including some functional bodybuilding helps keep him balanced and healthy.

Perform the exercises in order with as little rest as possible between movements and 90 sec. of rest between rounds.
Barbell Row
4 sets, 12 reps (no rest)

Perform the exercises in order with as little rest as possible between movements and 90 sec. of rest between rounds.
Lat pull-down
4 sets, 12 reps (no rest)

Perform the exercises in order with as little rest as possible between movements and 30 sec. of rest between rounds.
Triceps Extension
3 sets, 10 reps (no rest)

Perform the exercises in order with as little rest as possible between movements and 30 sec. of rest between rounds.
Reverse-Grip Triceps Extension
4 sets, 20 reps (no rest)

Weekends are for Strongman

On Sundays, all the efforts of the previous week culminate in an epic six-hour workout. There’s Oberst, surrounded by the tools of his brute-force trade, performing one event after another for hours on end. From the iconic atlas stones to the farmer’s walk, he does them all.

“Doing this workout once a week makes the actual contests seem easy in comparison,” he says. “I work up to a good weight over a number of sets for my main lift. Once I get up to about 80 percent of my one-rep max, I’ll do 2-3 sets there, then I’ll come back down for a few back-off sets. I rest generously, but I do a disgusting number of reps.”

No, it’s not how everyone else trains, but it’s hard to argue with Oberst’s results.

“Everything has come together so quickly for me because of the way I train,” he says. “At first, people were like, ‘Man, it’s ridiculous to do all those reps.’ Then a year or two into it, everyone was like, ‘Oh wow, tell me more about what you’re doing.'”